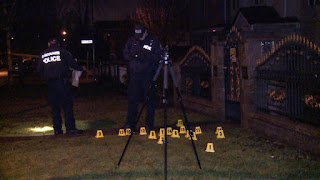 CBC is reporting that there was a targeted shooting in South Vancouver around 3:00 AM this morning. "The front window of the targeted house was shattered and there appeared to be numerous bullet holes right through the glass. Officers put up at least 20 evidence markers up on the front lawn. Const. Jason Doucette said no one was injured in the shooting but the occupants of the home were not cooperative with police. He added the investigation is ongoing."