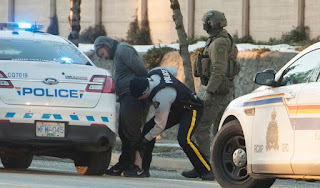 The Mission city Record is reporting that "Three suspects are now in custody and a hostage has been recovered safe and uninjured after a shooting incident earlier today in Mission. The incident began at about 1 p.m. today (Jan. 10) when Mission RCMP were called to the scene, in the Stave Falls area on Dewdney Trunk Road after receiving reports of a drive-by shooting."

"A woman has been taken to hospital with non-life threatening injuries after being shot. As police began their investigation, it was soon discovered that another person was being held against their will by the suspects. Police located and stopped the suspect vehicle in Coquitlam. “Our ERT team safely conducted a high risk takedown of the vehicle,” said Mason. Police now have three suspects in custody. A number of firearms have also been seized. A female, believed to have been taken against her will, was located safely in the suspect vehicle without incident.

The Tri city News posted pictures from the scene.