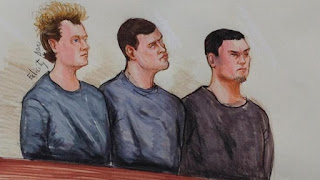 Postmedia News is reporting that "Three young men who pleaded guilty to the grisly murder of a Langley teen who had been their friend have been sentenced to life in prison with no parole eligibility for 18 years."

"Connor Angus Campbell, Bradley Michael Flaherty and Keith William Tankard, all of who were 19 years old when they carried out a sophisticated and co-ordinated plan to kill fellow 19-year-old Nicholas Hannon in February 2014, entered their pleas to second-degree murder prior to a sentencing hearing in B.C. Supreme Court in Vancouver on Monday."

The court heard evidence claiming that all tfour friends had been dealing drugs. Tankard wanted to withdraw from his drug dealing but was afraid to do so and approached Campbell and Flaherty for their assistance, and this was the origin of the murder plot, according to an agreed statement of facts read out in court by Crown counsel Bob Wright. What a crock of shit that is.

Three big guys were afraid of one small guy. Yeah right. Agreed statement of facts between whom? The three murderers and the Crown? I guess the one they killed wasn't able to testify. That lie fails the test of believability. The three guys felt intimidated by the one so they killed him? Highly unlikely. The first question is who were they selling drugs for? It wasn't the UN so it must have been you know who. That leaves us to ask which puppet club? Was it the 856? That would implicate Lenny the weasel. They same guy that got Bob Green killed.

If Tankard wanted to stop selling drugs the only one he would be afraid of is their supplier. If the guy they killed was linked to their supplier, they would not have killed him out of fear of retaliation. The only plausible conclusion is that the guy they killed was the one that wanted to get out and they were empowered to kill him by their supplier to shut him up. That is believable. The fraudulent statement of facts is not. This was a plea deal. It is not the truth.