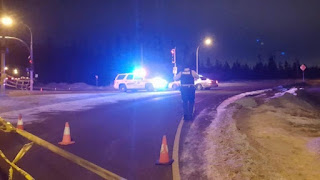 CBC is reporting that "The RCMP's Serious Crimes Unit is investigating a double-homicide in Prince George, B.C. early Wednesday morning. Mounties responded to a report of shots fired at around 2:40 a.m. at North Nechako Road near Foothills Boulevard. When they arrived, they found a vehicle with three adult men. Two of the people were dead and another was taken to hospital with what appeared to be serious but non-life-threatening injuries."

Update: Global News is reporting that Aaron Ryan Moore, 27, of Prince George, Perry Andrew Charlie, 24, and Joshua Steven West, 33, of Price Geroge have all been charged with murder. RCMP ares still searching for Seaver Tye Miller, 21 of Prince George who is a fourth suspect.

CBC is reporting that Aaron Moore and Joshua West both have criminal records. West was under a 10 year firearm ban.