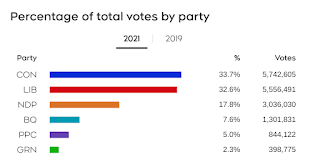 CTV is reporting that " As in 2019, the Conservatives captured the popular vote, but they failed to translate that support into winning the most number of ridings." The election does display a deep divide between urban and rural. This is easily understood when you look at Oregon.

5 counties in Oregon want to break away from the city and county of Portland and merge with Idaho because Idaho shares their values. Portland does not. It's not hard to understand why. Right now, Portland is a mess. It is a liberal sh*t hole filled with ANTIFA and violence.

New York City is the prime example of what happens when the Democrats take over. Their leftist policies result in higher taxes, higher crime and higher poverty for everyone which causes people and businesses to leave. Rudy Guliani fixed that with law and order. Bill de Blasio destroyed that with lawlessness and taxation. Curtis Sliwa can fix it again but it will take the old school political will New York was once famous for. I saw it in the /80's. It was an inherit part of the New York attitude which has been watered​ down and diluted by leftist lunacy. Conservatives believe in less government, more freedom and less taxes. That benefits everyone. It really is that simple.

Posted by Dennis Watson at 1:21 AM