The only possible explanation for the Liberals gaining a seat and the Conservatives losing 2 seats would be the fact that the PPC split the vote. Justin Trudeau hate is on the rise and this election has not changed that. It's only entrenched it. Justin Trudeau's new mandate: We hate him.

The Liberals popularity vote was 32.2%, the Conservatives 34.0%, the Bloc 7.7%, the NDP 17.7%, the Green 2.3% amd the PPC 5.1%. That means the PPC has twice the popularity vote as the Green Party. Justin Trudeau's popularity went down 0.8% from his last fall to a minority government even though he gained a seat. The Green dropped in popularity while the PPC rose.

The good news is that since Erin O'Toole lost ground Andrew Sheer made, they can now pick a Conservative leader this time instead of a Globalist. That won't split the vote again. If Maxime Bernier was leader of the Conservatives , we would make huge gains.

I love the expression on his wife's face seeing him wear a cowboy hat in Calgary. 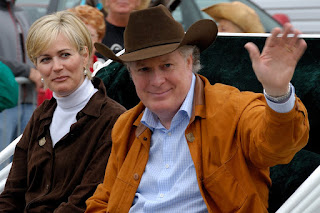 Posted by Dennis Watson at 3:19 AM