Stephen Harper opposes Jean Charest. That's why I support him. 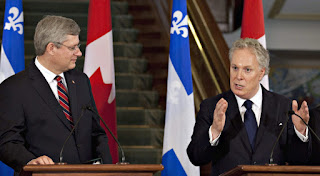 MaCLeans is reporting that "Former prime minister Stephen Harper has suddenly resigned from the board of the Conservative Party of Canada’s fundraising arm, as the party descends into organizational chaos and bitter recrimination in the first week of its leadership campaign. And since the first version of this article was posted, two top Conservative sources have told Maclean’s that Harper’s main goal in resigning is to free himself up to block Jean Charest’s campaign for the party leadership." LOL, well if Harper is against him then he must be good.

Stephen Harper is a bad man. He is a Neo Con that supports tax and spend insider trading and is an enemy of civil liberty. He is not a Conservative, he is a Neo Con as in Con Artist.

It comes as no surprise the Conservatives are scraping the bottom of the barrel trying to find someone to run against Jean Charest. After all, the tax and spend Neo Con is at complete risk.

Stephen Harper obviously wants his lost puppy Afghanistan war criminal Peter MacKay to win the bid. That is not in the party's best interest. Peter MacKay will not win Quebec. The party will continue to stagnate under his leadership and will continue to regress back into Mulroneyism which was what the Reform Party was created to oppose. Canadians don't like Jason Kenney. 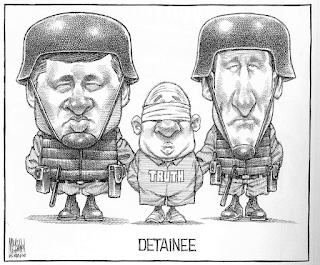 Stephen Harper used Jean Charest to get elected. He doesn't care about Quebec or Quebec values. He has his own agenda. Stephen Harper supports the Me First movement and wants to implement Corporate Communism. That is why he is an enemy of civil liberty and the Charter of Rights. Alberta is landlocked. BC supports Quebec. New Brunswick's bilingualism rate is rising.

"Zombie relics of rejected regime are crowding party’s leadership race. Any new party leader who served with Harper will be trying to hold together his original coalition - which means never winning the country. There is one possible hope for a different direction, an outsider named Jean Charest who is flirting with a leadership bid. The former Mulroney cabinet minister and Quebec premier never operated under the shadow of Stephen Harper."

"Charest could change the party’s hopelessly out-of-date policies on the environment and social issues without having to explain why he once supported them. None of the others can do that."

"Seamlessly bilingual, deeply experienced and steeped in Quebec and national politics, Charest could modernize the party, enhance its credibility, and extend its reach enormously. He could transform it overnight - and over Stephen Harper’s dead body." 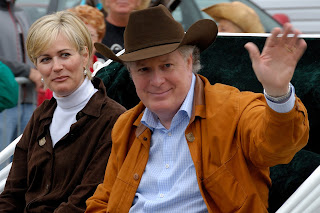 Posted by Dennis Watson at 4:17 AM