Fatal shooting outside of Toronto 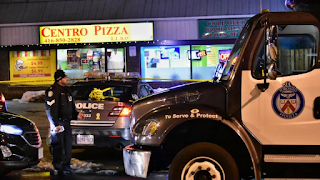 CBC is reporting that "One person is dead and another has been critically injured in a triple shooting in Scarborough, Toronto police say. Emergency crews were called to the area of Markham and Kingston roads around 9:20 p.m. for reports of gunfire. Insp. Jim Gottell said the shots are believed to have been fired inside a restaurant. Police say one man was shot in the chest and pronounced dead at the scene. A second man was shot in the head and rushed to a trauma centre. Both are believed to be in their early 20s.