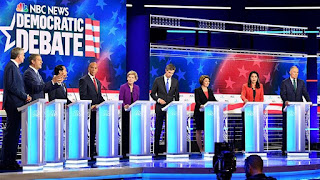 In this case I don't know enough about the candidates to make an endorsement so I'll let nature take it's course. However, I will point out that "The New York Times will announce its Democratic primary endorsement on Jan. 19." I find that statement interesting.

Growing up I always thought newspapers were supposed to be impartial. That's why I found Rupert Murdoch's political bias so disturbing. The New York Times certainly has every right to make an endorsement in an election. Since, unlike the New York Daily, the New York Times is not owned by Rupert Murdoch, I would take their endorsement a little more seriously. The caution I have is when a media monopoly makes an endorsement then censors negative stories about their endorsement. When one media giant owns a monopoly, that kind of bias is concerning.

Amy Klobuchar talked about fiscal responsibility and said Trump has run up the debt. That is a good point. Everyone claims the left will tax and spend while the right will reduce spending and taxes but we see in reality that is far from the case. Neo Cons tax and spend more than the left does. Those pork barrel politicians are not fiscally responsible. This is why I supported Thomas Mulclair in Canada. He said the same thing.

I'm not a fan of abortion. In cases of incest or rape it is a very hard and very private decision. When the health of the mother is at risk it is automatic. It's not even called an abortion it's called a D&C. However, late term abortion as a form of birth control is sheer irresponsibility. Abortion stops a beating heart. It reminds me of when ancient Greece would leave disabled babies to die on a hillside. We are better then that. So although killing babies isn't a priority I obsess over, I realize there is more than one issue on the table. I don't support gun control either.

For me, drug trafficking, arms dealing and oil wars is important. All of that is tied directly to the CIA. That means my concern is how close is the presidential candidate with the CIA? Hilary Clinton was too close. Her drug trafficking didn't start with Operation Fast and Furious, it started in Mena Arkansas. Neither did her arms dealing begin and end with Quatar and Saudi Arabia. Arming ISIS has become an American tradition that we need to address.

All I know is that Donald Trump has lost his mind. Destabilizing the Middle East by threatening a disproportionate terrorist attack against Iran was purely satanic. That is how history will remember him. Wars and sanctions need to revolve around moral principles not corporate greed.