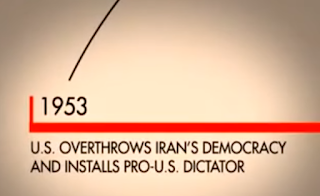 I want to clarify the obvious. Iran did not intentionally shoot down a passenger plane of it's own citizens. That did not happen. After the United States killed the Iranian general responsible for defeating ISIS in Iraq, Iran said they would retaliate by hitting a military target which they did. Donald Trump was the one that threatened a terrorist strike. Iran did not. It is remotely possible that while Iran launched missiles at a military target, a passenger plane flew in the trajectory of those missiles. That is remotely possible but I don't believe that is what happened. I believe something much more sinister is at play.

"The plane was bound for Kiev and many on board had a connecting flight to Toronto, Canada's largest city and a transit hub. Of those passengers, 63 were Canadians citizens. Canadian Prime Minister Justin Trudeau has said that, all told, 138 people on that flight were en route to Canada."

"In total, 82 Iranians and 63 Canadians were on board the Kyiv-bound Ukraine International Airlines (UIA) Flight PS752, Ukraine's Foreign Minister Vadym Prystaiko said. There were also 11 victims - including nine crew members - from Ukraine, four Afghans, four Britons and three Germans. Iran's head of emergency operations said 147 of the victims were Iranian, which suggests many of the foreign nationals held dual nationality." The majority of the Canadians on board were of Iranian descent. Iran did not shoot down a plane load of it's own citizens.

I will declare that this is a complete tragedy. Worst case scenario it was a horrible accident.

Q is calling for a regime change in Iran. What is this 1953? Q has outed himself.

Where did this video come from? Iran did not give it to the media. The CIA did.

What is the CIA doing INSIDE Iran?

Iran denies shooting down the airliner of Iranians

Where is the rocket's red glare? Take a look at this video posted on the New York Times web site. Who is filming it? They are anticipating something is going to happen with a plane they can barely see. That "missile" doesn't look like the missiles Iran used. That "missile" is traveling awfully fast. Not only is the plane being targeted it's a pretty impressive hit. IE that's hard to do. Iran would not have targeted a plane load of it's own people.

CBC claims it looks like a Tor M1 sytem. That isn't what they used in the US Military strike in Iraq.

The CIA claims Iran mistook the airliner for a US military jet and shot it down by accident. That is not believable. Iran is trustworthy. The CIA is not. Lying is their MO.

"If it is determined that it was an Iranian missile, Mr. Trudeau will have to grapple with the question of whether the United States, Canada’s most important ally, played a role in provoking the events that ultimately resulted in the loss of Canadians’ lives." Yes but Iran did not fire the missile. The CIA's false allegation does not make sense.

Iran would not have targeted an airliner full of it's own citizens and they did not mistake the airliner for an American military jet in their airspace. That is ridiculous. The "intelligence reports" are coming from the CIA. They are the prime suspects. The CIA has a long criminal history.

Update: BBC is reporting that "Iran says its military unintentionally shot down a Ukrainian passenger jet, killing all 176 people on board, Iran's state TV reports. The statement said it had done so due to "human error" after the plane flew close to a sensitive site belonging to Iran's Revolutionary Guards. Mistaken for a hostile target, the jet was hit by a missile, the statement said. Those responsible would be held accountable, it added."

The President of Iran has stated: "The Islamic Republic of Iran deeply regrets this disastrous mistake," Hassan Rouhani said late Friday in a post on Twitter. "My thoughts and prayers go to all the mourning families. I offer my sincerest condolences." Rouhani said investigations continue to "identify and prosecute this great tragedy and unforgivable mistake."

Lest we forget, the Americans killed Iran's General for defeating ISIS

Aviation experts question why Flight PS752 was cleared to fly

Final update: I still do not believe Iran did it despite their confession. I think they cut a deal with the Americans. If Iran claimed responsibility they would let their pipeline go through to Syria or something like that. Libya paid the Americans bribe for the Lockerbie bombing even though they didn't do it. Major Charles McKee, of the Defence Intelligence Agency, filed the complaint about the CIAs drug trafficking in Lebanon and was on that flight along with three other members of the team with evidence to expose COREA unit’s deal with al- Kassar.

Libya had absolutely no motive to kill Major McKee and his team on the way home to expose the CIAs drug trafficking. The only group that had a motive to stop him and kill him was the CIA. Nevertheless, Libya paid the bribe but never admitted responsibility.

In this case with Iran, there is no doubt that Iranian troops were on red alert for an impending invasion as soon as they fired their retaliation missiles. Donald Trump threatened disproportionate terrorist attacks on 52 holy sites in Iran. As soon as they launched their missiles, their troops would have without question been hyper vigilant about American bombers flying into their air space to bomb their holy sites as Donald Trump had threatened.

When that disproportionate counter strike occurred they would have no doubt been flying in from their allies in Western Ukraine. It is therefore quite possible that Iranian soldiers shot down the passenger jet approaching Terran from the Ukraine in fear they would bomb their holy sites like Donald Trump said they would. The only problem with that theory is that the flight was leaving Terran heading for the Ukraine. The CIA's claim and Iran's confession does not make sense. I do not believe they did it. If they did, Donald Trump must assume 50% liability for the disaster for threatening a disproportionate terrorist strike in Iran. However, I do not believe they did it despite the confession and hereby record my dissent.

It's like the war in Afghanistan. All of a sudden the Taliban have agreed on American ownership of the pipeline. Three months before 9/11 the Texas oil companies were wining and dining the Taliban in hopes to win the contract for the pipeline. As soon as the Taliban decided against the Americans and awarded the contract to a firm from Argentina, Afghanistan was invaded and the decision was reversed. These oil wars diminish us.

The fact that the CIA had someone on the ground filming the plane crash before it happened anticipating that it would happen is just too coincidental for me to believe. The CIA need to stop meddling in Iranian politics. That is the root of the problem.

In contrast Iran holds regular elections for President and women in Iran were granted the right to vote back in 1963. They were first admitted to Iranian universities in 1937. Since then, several women have held high-ranking posts in the government or parliament. In Iran, women not only drive but can hold public office, and attend university.

The 9/11 terrorists didn't come in from Iran, they came in from Saudi Arabia AFTER the CIA overruled their passport denial. Canada and the US are arms dealing with Saudi Arabia who in turn arm ISIS. Calling for a regime change in Iran but not Saudi Arabia is sheer hypocrisy and is strictly about taking over their oil which has absolutely nothing to do with social justice.

Iran Contra needs to come to an end. We do not need a 1953 Remix

Some Canadians Are Angry At The U.S. Over Iran's Downing Of Flight 752

Trudeau: Iran plane victims would be alive had there been no regional tensions

Canada getting access to black boxes from downed Ukrainian airliner

Why would the Americans block Iraq's oil cash? That is extortion. Trump is not the Messiah. He is the devil. The invasion of Iraq and the hostilities with Iran are solely about oil. When it comes to social justice here, we are on the wrong side.