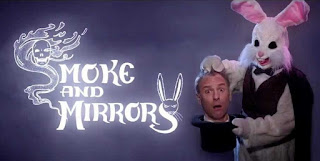 There is a little drama over the possible release of a "classified" 911 document in the news which purports to be yet another circus side show. The New York Daily news is reporting that CIA Director John Brennan says documents that could link Saudi Arabia to 9/11 terrorists should be kept classified. Are you kidding me? Why even cite the CIA director? That's like citing Pablo Escobar or Maneu Noreaga. The CIA are drug traffickers.

The New York Daily states: "Former Florida Sen. Bob Graham, who co-chaired the joint Congressional inquiry, has been leading a push to release the documents, saying they suggest a Saudi role." No kidding. According to CNN 15 of the 19 hijackers in 911 came from Saudi Arabia and two came from United Arab Emirates where Erik Prince built his little mercenary army.

This is nothing new. The fact that the CIA ordered Mike Springman to approve their passports after he had denied them is nothing new either. What's new is this fake report claiming it was because of diplomatic immunity which is a bold faced lie.

The New York Post claims "Case agents I’ve interviewed at the Joint Terrorism Task Forces in Washington and San Diego, the forward operating base for some of the Saudi hijackers, as well as detectives at the Fairfax County (Va.) Police Department who also investigated several 9/11 leads, say virtually every road led back to the Saudi Embassy in Washington, as well as the Saudi Consulate in Los Angeles. Yet time and time again, they were called off from pursuing leads. A common excuse was diplomatic immunity.”

That is nonsense. Diplomatic immunity wouldn't even explain why investigations were called off. These weren't diplomats. Neither would it explain why the CIA approved their passports after they had been denied. It is more smoke and mirror bullsh*t. Meanwhile, back on the ranch, the CIA 'live tweets' Osama bin Laden raid to mark the 5th anniversary of the raid. Yet back in reality, the Bin Laden "confession" video didn't even look like bin Laden.

Absurdly, as we speak MSN is reporting 9 Travel Safety Tips from a Former CIA Agent. The CIA is spamming the media with more smoke and mirrors bs in it's continued disinformation campaign. How about some CIA live tweets about their involvement with Operation Fast and Furious or their years of drug trafficking in Vietnam and Nicaragua?

Global Research is referring to it as a red herring propaganda ploy because that is exactly what it is. The CIA approved the passports after they were previously denied. That's all there is to it. The CIA spamming the media with nonsense has become ridiculous. They have no credibility after MI 6 was caught sending the media fake reports about Iraq's WMD in Operation Mass Appeal.

The CIA spamming the media with press releases is reminiscent of how they sent out the press release on the collapse of the third tower in New York to BBC early by mistake. They sent the press release out before it even happened. The third tower collapsed at freefall speed into it's own blueprint just like a controlled demolition even though no planes hit that tower. BBC reported that it had collapsed before it happened. Later they explained that they simply made a mistake and that they weren't in on any conspiracy.

If you report a murder that didn't happen that is a mistake. If you report a murder that did happen before it happened, that is not a mistake, that is inside information. The BBC obviously weren't part of the conspiracy. They were simply reporting on the press release the CIA had sent them early by mistake which they now deny but is the only plausible explanation. The CIA need to explain how they knew it was going to collapse before it did and how they had press releases prepared before hand. The CIA is a criminal organization. Buyer Beware. 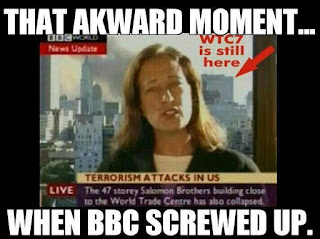