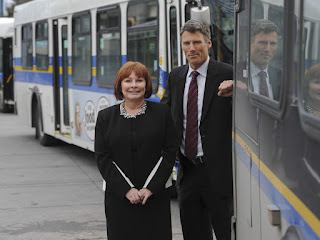 The Mayors's glutton council want to raise taxes again to pay for Translink expansions after that failed referendum on raising sales tax to pour more money into the over budget a billion dollars a year fiscal disaster. These two nutcases should be in jail. Linda Hepner is just taking up when Dianne Watts left off continuing the largest debt in the city of Surrey's history what with her Ivory Tower and her all expense paid junkets and all. Gregor Robertson is just as bad. Insisting we expand Translight before they balance it's budget. They already burn an extra billion dollars a year in a regional gas tax and they still want more because they insist on expanding it when it sucks and they give away a million free rides every year.

Earlier this month the Vancouver Province reported that "The City of Vancouver appears to have breached its procurement policy after Vision Mayor Gregor Robertson reportedly approved a contract worth almost $95,000 for a prominent supporter of his party, according to a legal expert."

Why was the contract for the Evergreen line, which we don't need because Translink sucks, given to SNC-Lavalin after it was banned from world contracts due to it's involvement with corruption and fraud. Giving them the contract was a criminal act. Now they want more money above the billion extra dollars a year they already burn simply because when you're a glutton, enough is never enough. Notice the new Translink CEO was nowhere near this one. He's too smart for that. He has business sense. These two devils do not. They are gluttons out of control that need to be restrained for the public good. Why would we toll the Lions Gate bridge after it was already tolled and paid for? Selling crack is not a Charter Right but mobility rights sure are.

"Delta Mayor Lois Jackson said she was concerned the mayors were backing down on their stance against increasing property taxes after 'we stood that line for a long time,' while looking to slap more fees on drivers - especially in communities south of the Fraser River where they don’t have the transit services in place." Indeed. Keep her, fire Hepner and Robertson. It's that simple.

Delta MLA Walter Davidson was right - scrap the GVRD and the Mayors glutton counsel. It's a costly bureaucratic and ineffective organization. We already have a provincial government.