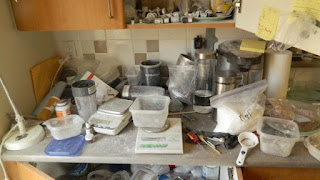 The Surrey Leader is reporting that Delta Police busted a fentanyl drug lab in a Burnaby condo and seized over 16 kilograms of cocaine and heroin. They also seized nine firearms and two noise suppressors, over 100 kilograms of cutting agents, more than 4,500 oxycodone or oxycontin pills, more than a kilogram of methamphetamine, and 125 grams of pure fentanyl were seized. Well done. Fentanyl is deadly. Methamphetamine is crystal meth.

CBC posted pictures of how filthy it was. $1.5 million was also seized. Meanwhile back on the ranch, Surrey logged it's 40th shooting on Wednesday. Kevin Diakiw put out a thought provoking article on mental illness and drug addiction. It's an old series but I just noticed it and find it timely.

Posted by Dennis Watson at 3:10 PM