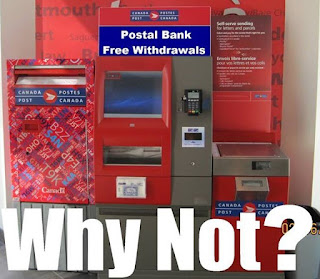 CBC is reporting that the Liberal government has created a pannel to hear from Canadians about the future of Canada Post. Saving door to door delivery is on the table. So is the possibility of creating a Postal Bank. I oppose the privatization of Canada Post not because I'm a dinosaur but because I oppose increased taxes. Canada Post is a cash cow for the government. It is an efficient company that makes profit and pays dividends. If they privatized Canada Post they would lose all that tax revenue and have to raise taxes to make up the difference.

Yes I used to work at the Post Office. I used to be a Letter Carrier for over 10 years. I was metaphorically, a child of a mixed marriage. My father was LCUC and my mother was CUPW. I could speak at great lengths about the shotgun wedding between the two very different unions and the subsequent animosity and raiding. Yet like any other child from a bad divorce, I recognize that every parent and every person has good and bad. I want to remember the good from both my parents and move forward in a positive direction. Increasing business revenue is a good thing.

When I was with Canada Post I launched a group called CUPW New Vision. It was to trade unionism what nouvelle cuisine was to the culinary arts - a new refreshing way to look at the classical traditions. At the time I mentioned the possibility of creating a bank at Canada Post to increase business revenue. France, Germany and England had already done so. Why not us?

It appears that the new union has picked up on the idea and have embraced it. That is something I can support. We need to think of ways to reinvent ourselves so that we are productive and profitable in the new market. The music industry certainly has. We can too. The Huffington Post claims Canada Post operated a savings bank for 100 years, between 1868 and 1968. The National Post claims it was disbanded in 1968 after the banking industry objected to the infringement on their monopoly. Clearly this is something we should reexamine. Peace.

Update: It appears I'm not he only one that thinks creating a Postal Bank would be a good idea. Ellen Brown wrote a very interesting book entitled The Public Bank Solution: From Austerity to Prosperity. The Watershed Sentinel is reporting that "One of the most important legal cases in Canadian history is slowly inching its way towards trial. Launched in 2011 by the Toronto-based Committee on Monetary and Economic Reform (COMER), the lawsuit would require the publicly-owned Bank of Canada to return to its pre-1974 mandate and practice of lending interest-free money to federal, provincial, and municipal governments for infrastructure and healthcare spending." Obviously the big banks are opposing this with a passion and is the very reason voters should be supporting it. A Postal Bank could accomplish the exact same thing. Obviously we'd need a new CEO of Canada Post that has the vision to follow through with it. 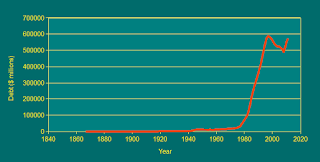 Note: After 1974 the national debt started snowballing out of control because of the increased interest payments. "Obviously something went terribly wrong after 1974." Canadian Citizens Coalition for Monetary Reform. That was when the Basel Committee discouraged borrowing from a nation’s own central bank interest-free and encouraged borrowing from private creditors.

The Tyee is reporting that "(COMER) a very small and low-budget Toronto think tank have been steadily winning court battles initiated in 2011 that would oblige the Bank of Canada to return to its pre-1974 practice of lending the government money virtually interest free. But the mainstream media has boycotted the story."

This is important because: "Once a nation parts with the control of its currency and credit, it matters not who makes the nation's laws. Usury, once in control, will wreck any nation." -- William Lyon Mackenzie King, prime minister of Canada, 1935

Turns out another blogger agrees with the reestablishment of a Postal Bank. 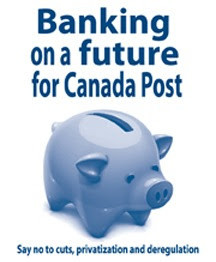 Posted by Dennis Watson at 7:14 AM