Not to spoil the mood, but we seem to be witnessing a world of extremes. The Syrian refugees we have met in Surrey and Vancouver are wonderful. They are fleeing a war. A war between pro and anti government forces with the strange introduction of a bizarre third party that is so outrageous they are uniting all Muslims around the world to oppose them.

We first heard about ISIS in Syria. They seemingly came there from Iraq after that country was unlawfully invaded based on a lie. When they arrived in Syria and started committing outrageous acts, the government said it's not us. Then the rebels said it's not us either. So who then is it?

We are still getting regular reports of completely outrageous acts that make no sense whatsoever and have no genuine motive with a news report stating that ISIS has claimed responsibility for the attack but no reference confirming the report. Surely ISIS has the means of creating a web site or a Twitter account. We keep getting these third party reports about claims ISIS has made with no ability to confirm the claim. It's not just suspicious, it just doesn't make sense.

Then there was that fake picture of a Canadian Sikh that was photoshopped to make him look like a terrorist holding a Koran wearing an explosive vest when he was really holding a holy book from a different religion and wasn't wearing any explosive vest at all. That fake picture was printed in the press claiming it was one of the Paris bombers. The paper claimed it got the picture from the same source that ISIS claimed responsibility for the attack from. That is why we need to confirm the source. They have been wrong before. That fake photo was an intentional act of fraud.

Recently a group of corporate thugs hacked into a local activist named Laila Yuile's blog and twitter account because she was posting information against the Site C Dam. The group that hacked her blog and twitter account claimed to be anonymous but they obviously weren't which had opened pandora's box. This same group that claims to be with anonymous but aren't are posting information about ISIS they claim they have obtained by hacking into ISIS. After they crashed Laila's blog their credibility has been destroyed so that means their information on ISIS has now become suspect as well.

When we first approved the military mission in Afghanistan we were told that Afghanistan was responsible for 9/11. Yet the bin Laden "confession" video didn't even look like Bin Laden. Consequently when the CIA sends out a press release to the media stating ISIS has claimed responsibility for an attack, we are going to have to see some other evidence since their credibility has been lost over the Iraq media disinformation campaign referred to as Operation Mass Appeal.

Remember the Ayatollah Khamenei? Well evidently he still exists and guess what, he even has a web site. So if the Ayatollah can have a web site why can't ISIS? The Ayatollah claims that the US, Britain, and Israel created ISIS and have been aiding and abetting the terrorist organizations which they claim to be fighting. Well isn't that ironic. CSIS was indeed caught supporting ISIS.

Previously I wrote about a TV Series on Netflix called American Odyssey. It is fiction but is very plausible and is well worth watching. Everything that happened in that series could happen in real life. It is something we need to think about after the declassification of Operation Northwoods. I highly recommend people watch it. It is very well done. 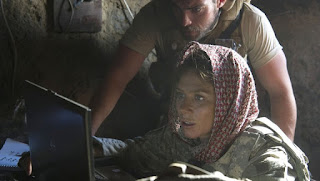