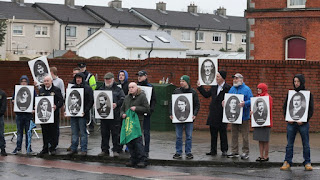 I have a few stories to catch up on but I just wanted to pause on this one to give us a chance to reflect in case there was someone out there I have not yet offended. The Canadian Ambassador to Ireland is in the news after tackling a protester in Dublin. We have to pause and reflect on how outrageous and offensive this ceremony was on Irish soil. This wasn't in London, this was in Dublin. This is like the Nazis having a ceremony in France mourning the loss of its soldiers when it invaded France or North Korea holding a ceremony in South Korea mourning the loss of its soldiers when it tried to invade South Korea. It is freaking offensive. Sure soldiers are people too and everyone wants to remember those who died fighting for their country but if you don't want your soldiers to die don't invade another county.

All the Protester said was this is an insult and it bloody well was. If you want to have a ceremony in England remembering soldiers that were killed when you invaded another country have at it but don't do it on sovereign soil. It is insanely offensive. That's like the Protestants marching through Catholic areas in Northern Ireland on the 12th of July throwing it in their faces that they lost some battle back in 1690 which somehow gives them the right to remove all Catholics civl liberty today.

Do we have any idea what the Easter Uprising was? We all get upset when Saddam Hussein invaded Kuwait but that is exactly what England did to Ireland. They invaded a sovereign state just like Hitler or North Korea did. During Easter in 1916 when the world was opposing Germany's invasion of Europe and was silent on England's invasion of Ireland, a group of noble men took the Post Office and struck for freedom. Have you read the inspired contents of the Irish Proclamation the founding fathers were executed for signing? It is worth reading.

On behalf of Canada I would like to formally apologize to Ireland for this offensive disregard for their liberty. Peace begins by respecting the struggle for freedom. Erin go Bragh. Tiocfaidh ár lá.