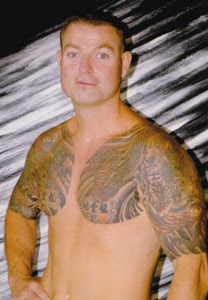 In contrast, let's take a look at local celebrity Clay Roueche's new book and website. They have a video on youtube called Boss Weed. No doubt that was taken from the Rolling Stone Article on Clay which referred to him as Boss Weed and compared him to Pablo Escobar. The article explained How a blue-collar kid from Chilliwack, British Columbia, forged his own samurai code and raw ambition and became the King of B.C. Bud. Clay's new book is called The Book of Indomitable Virtues. Yes he's still in prison. The music is from Pepperblade. A rapper from Texas.

Clay's new website states: "Clay believes that no matter what a person's past may have been, their future is whatever they choose to make it." Indeed it is. It has also been said that no matter what your past, you have a spotless future. The website has a historical background posted under capture the facts.

My angel on Clay and the UN is a little different that others. Unlike the Hells Angels they don't pretend to be something they're not. Clay is a celebrity because the UN wasn't like all the other ass kissing puppets. Unlike the babylonian hoard of clone puppets they stood on their own. They didn't try to be rivals like the Rock Machine in Quebec. They just said he we are. We're the new kids on the block and we will fight for our right to be here. That they did. The Hells Angels were forced to recognize them and do business with them. However, since the HAs only like ass kissing puppets, they found ways to be friendly to their face but stab them in the back at the same time. Supporting the UN and the Bacon brothers at the same time was a prime example.

Yet after they showed up at Brandi's with K9 and kicked the Hells' Angels ass, one could likely foresee that the Hells Angels would hold a grudge. After that incident John Punco was caught on wire and said the UN are not welcome in this province and neither is anyone that does business with them. Yet they did do business with them and you can't blame the Hells Angels support of the Bacon brothers on Larry Amero. He was on club business. What Larry did was sanctioned by the club so let's not kick the cat and blame Larry. Shooting Larry won't solve anything. He's already been screwed over by the Big Red Machine.

Being the cynical conspiracy theorist that I am I have to ask why is Clay in prison and not Sony Barger? Probably the same reason Manuel Noriega is and Oliver North isn't. Dirty politics. The way they shafted Clay was pretty cheap. He was on a flight to a wedding in Mexico and they rerouted his flight to land in the US and arrested him in the US after they rerouted his flight. That was cheap. Meanwhile back on the ranch Randy and Trevor Jones still haven't been extradited on their charges. Oh wait, Randy's not even charged. It's the double standard that bugs me.

I have two points to make. Clay does have a background in the martial arts and that is to be respected. The Rolling Stone article made reference to Clay's Samurai code which his new book appears to exemplify. I guess the problem I'm having processing all this is my personal belief that real Samurais don't sell crack. Ninjas were trained assassins. Mercenaries for hire but Samurais were suposed to be different. Like Arthur's Knights of the Round Table or Orlando Bloom's quest for chivalry during the Crusade in the movie Kingdom of Heaven.

In the struggle between good and evil I just can't get around my personal bias that selling crack in on the wrong side of that struggle. No one cares about weed. Trading all that BC Bud for the CIA's cocaine in Operation Fast and Furious only to bring the US crack epidemic of the 1980s to Canada is just plain wrong.

In all the Bruce Lee movies he fought against the bad guys bringing in all the heroin. Somehow I just can't get my brain around the idea of a buddhist monk riding around in a grossly over priced luxury vehicle. Somehow that just doesn't scream enlightenment nor does the oppression that greed created to get it. But that's just me.

The one event that stands out in my mind from Clay's history is the claim that he helped one of his dealers overcome his addiction to crack cocaine. Kim Bolan interviewed the guy. He said that Clay had him chained up beside a toilet for three days and paid guys to watch him to make sure he was OK while he got off the drug. The guy said he was furious at the time but afterwards was deeply moved and grateful for the love Clay showed him in getting his life back. Shouldn't eveyone have that same chance? Oh and since they scrwed him over in the arrest they should approve his prison transfer back to Canada. Justin Trudeau might agree to that. Peace.