Gatekeepers patching over to the Hells Angels in Nova Scotia 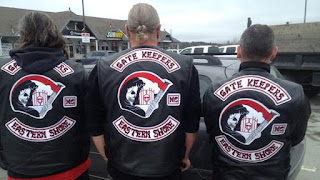 Rumor has it that a few Gatekeepers in Nova Scotia are patching over to become Hells Angels today. Dave "Hammer" MacDonald from the London Ontario Hells Angels is suposed to be in town for the event. Most of the Gatekeepers are just low level wannabes. Perhaps some of the presidents will get patches. It will be interesting to see how the hammer falls so to speak. It will also be interesting to see if the government steps in to seize their clubhouse (again).

The London Free Press reported that "The Gate Keepers in London trace their origins to longtime London biker David (Hammer) MacDonald. He controlled a group called the H-Crew Motorcycle Club and in 2013, had those members patch over to the Gate Keepers, according to testimony at a liquor licence hearing involving a Hells Angels member." H-Crew stood for Hammer Crew. He must be a fan of MC Hammer. David MacDonald left the Outlaws as its president in 2001 and patched over to the Hells Angels. L&R sold out to the highest bidder.