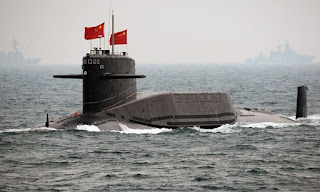 Welcome to another day in the Twilight zone. The Guardian is reporting that China to send nuclear-armed submarines into Pacific amid tensions with US. Who the hell do you think gave Communist China the materials and the technology to arm those nuclear missiles on that sub? Canada did. First it was Jean Chretien's sale of military weapons and CANDU reactors to the Communist dictatorship. Then Stephen Harper did the time warp and thought selling China nuclear reactors was a good idea. It's not like they would ever use it for the wrong purposes or arm any terrorist organizations in the world or anything like that. Which once again forces us to ask ourselves which side are we on?

Let's not forget how Stephen Harper sold Communist China our oil rights. He didn't just sell them oil, he sold them our oil rights. That means every time we fill up at the pump we are funding the military expansion of a Communist dictatorship. Stephen Harper was more of a Communist than Pierre Elliot Trudeau ever was. History has recorded that. Guess who got the contract for CANDU reactors in China? SNC-Lavalin. I kid you not. The same criminals that got the Evergreen line after they were banned from world projects for corruption and money laundering.