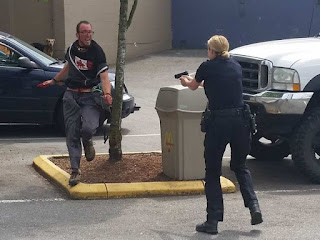 The Vancouver Sun posted some pictures from that police shooting in East Vancovuer May 24th a witness took on their cell phone. This story has a happy ending. She put one in his leg not in his chest. You don't always have to shoot to kill. Just like with the suicidal man in Safeway. 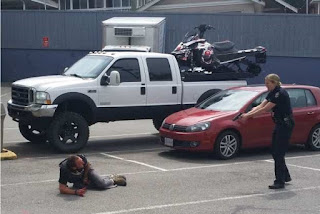 Ouch. You shot me. Why the f*ck did you do that? That's police brutality.

You charged me when I had my gun drawn dumb ass. 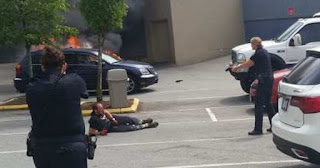 I guess it could be worse. At least you put one in my leg and not my chest.

I couldn't see the knife but the fact that he charged her with her gun drawn means shooting him in the leg is well within reason because even if he was unarmed he could have grabbed the gun. 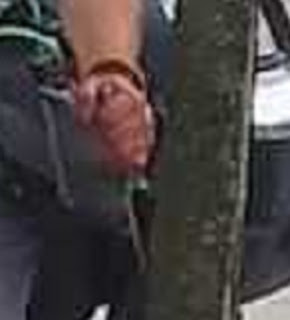 I think I can see the knife now. Since he was bleeding from the stomach in what appears to be a self inflicted wound he clearly appears to be on something. Shooting him in the leg showed professional self control and restraint. Well done. Very different from the Hudson Brooks case.