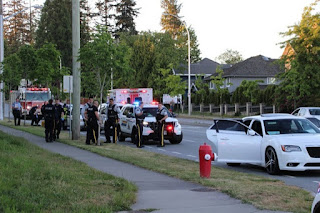 Kevin Diakiw from the Surrey Now is reporting that there were two more recent shootings in Surrey. One on Monday night and the other Tuesday night (Tonight). "At about 7:45 p.m., Surrey RCMP received a call of shots fired at the busy Newton intersection. When officers arrived, they found evidence of gun violence and later determined shots were fired between vehicles. The suspect vehicle was seen fleeing from the area and the targeted car has since been found. No one was shot in the incident, but a male sustained minor injures from shattered glass."

"At about 2:20 a.m. Monday, police were called to report of shots fired in the 7600-block of 135 Street. Mounties found evidence at the scene but no victim. Moments later, Surrey RCMP received a call from an Abbotsford hospital reporting someone showed up with gunshot wounds saying it happened in Surrey. The two latest shootings bring to 35 the number of shots fired incidents in Surrey so far this year."

Update: News 1130 is reporting that a man has been shot in East Vancouver around 3:00 PM this afternoon (Wednessday) near Nanaimo and Dundas.