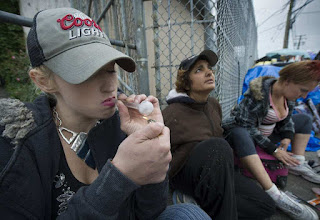 The Vancouver Province ran a front page article yesterday with an in depth spotlight on the epicentre of drug related violence in Surrey outsode the Front Room. The article stated Drugs, sex and stolen goods: Population grows on vice-ridden Surrey Strip.

The Vancouver Sun also ran the article which explained "The two blocks of 135A Street between 106th and 108th avenues has long been a place where people who are homeless and addicted to drugs have congregated, mostly because it is close to medical services, food and shelters, and drugs are readily available." Drugs are readily available. They are sold in public and the police let them. That is why addicts go there. That is why addiction has spread like a forest fire consuming everything in it's path.

I have a lot more to say on this but just wanted to throw the links out there so people had a chance to read the article for themselves but I will say this. Note the picture in the Vancouver Sun article. It's a picture of a young woman smoking a crack pipe in public. Only it looks like a meth pipe since it has a round ball at the end. Crack pipes are normally straight glass tubes. This is all happening in full view outside the needle exchange which is no longer an exchange. They just hand out free needles for addicts to discard anywhere they want.

If we had a moral conscience we would support harm reduction not harm promotion. This is a place of exploitation. There are two reasons for it. One in the lack of affordable housing, the other is the public sale of crack. This brings us back to a crime prevention meeting in Surrey back in June 2008. Local residents complained that the police let people sell and smoke crack in public and they don't do anything about it.

The former owner of the Dell complained and said if someone lights up a cigarette outside his bar that person can be fined $2,000.00 and that fine can be enforceable. Yet the police drive by people selling and smoking crack and do nothing. That isn't right. Why am I the one having to live with bars on my windows? Mike Farnworth having to agree with the man's concerns shook his head and said all he could say to that was cite a quote from Charles Dickens and said "Sir, if the law believes that then the law is an ass." Indeed it is. Let's fix it while we still can.

It's important to remember how this desperate situation relates to the Janice Shore and the Dianne Rock story. Janice Shore was a homeless drug user that was found beaten to death at the end of this notorious Strip outside the Front Room in Surrey. The brutality of the Janish Shore murder outraged me. She was sexually assaulted and beaten to death. She was in a coma for two months from which she never recovered. I visited her in the hospital on Christmas morning.

One one side of her head her jaw had been literally caved in and on the other side of her head her temple was caved in. I wondered what could have caused those kind of injuries. It had to have been some kind of blunt forced trauma. A few months later while I was visiting the Front Room one of the patrons dropped a happmer out of his backpack. That's when the light went on. A hammer could have created those injuries.

Cpl. Bert Paquet from IHIT told a press conference Janice was involved in “high-risk activities” at the time of her death. He would not reveal whether she had been sexually assaulted or whether a weapon had been used. I spoke with him months later and he told me the police had no evidence Janice had been sexually assaulted. I said yes you do. She was found with her underwear pulled down around her ankles. You have the testimony of the witnesses that found her. In a court of law, testimony of witnesses is evidence.

Janice wasn't a sex trade worker per say. She was a quiet soft spoken panhandler. Like Dianne Rock she was forced into the sex trade after the addiction took hold to pay for the drug. If Janice shore was killed for a drug debt it couldn't have been a large one because she was a user not a dealer. Years later a former sex trade worker from the Strip outside the Front room contacted me and confirmed Janice had worked in the industry for a brief period of time. She said all the other girls hated her because they were trying to raise the bar and make some money. Janice would be gone half the day and come back with f*ck all. 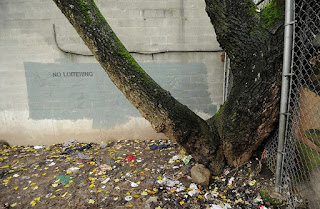 Larry Mizen was the primary drug debt enforcer for that Strip. Everyone there knew about his brutality and was terrified of him for good reason. He was the prime suspect in her murder. If he did not do it, he knew who did. Not long after that information was made public he was found beaten to death in his rented home not far away. Larry Mizen worked for Len Peltier. The Hells Angels terminated Larry's contract and reassigned Lenny to Whitehourse.