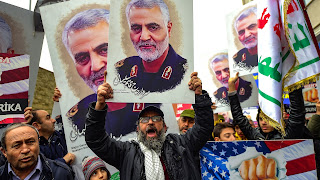 CNN is reporting that "Instagram and its parent company Facebook are removing posts that voice support for slain Iranian commander Qassem Soleimani to comply with US sanctions, a Facebook spokesperson said in a statement to CNN Business Friday." Welcome to the Brave New World. Which ones are the bad guys again? Please advise.

Journalists demand end to censorship of Iranian media on Instagram

Coda Story is reporting that "After a U.S. drone strike killed Iran’s General Qassem Soleimani, Iranians flocked to one of their favorite platforms, Instagram. But in the days following the general’s death, journalists, activists and ordinary Iranians have experienced shutdowns and censorship – not from Iran, but from Instagram."

"At least fifteen Iranian journalists have reported having their accounts suspended, according to the International Federation of Journalists. Government-owned and Islamic Revolutionary Guard Corps-affiliated media agencies such as Tasnim News Agency, the Iran Newspaper and Jamaran News all had their accounts, with a combined hundreds of thousands of followers, removed entirely by Instagram. “This poses an immediate threat to freedom of information in Iran,” the International Federation of Journalists said in a statement."

"Iranian influencers, human rights advocates, and activists are also experiencing account shutdowns. “It’s very widespread, it’s huge,” said Amir Rashidi, an Iran internet security and digital rights researcher based in New York, who watched on Instagram as account after account in Iran was shut down or had posts removed after users discussed the killing. “Every person I saw that posted about Soleimani on Instagram, almost all of their posts have been removed.”