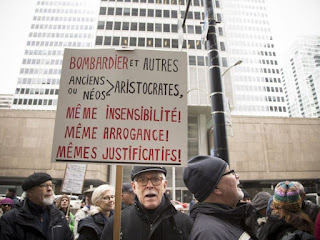 The Canadian Press is reporting that "The future of Bombardier Inc. is being called into question after the company said it was actively considering alternatives to reduce its staggering debt."

Yeah well just don't consider another tax paid bailout. Bombardier is corrupt like SNC-Lavalin. We need to recognize that and move on. They use bribery to underbid and over charge government contracts just like Lockheed Martin. We need to stop burning tax dollars on corporate corruption.

Global reported that "Vancouver city council has voted to have the city review its relationship with Canadian engineering giants SNC-Lavalin and Bombardier. If SNC-Lavalin is eventually found guilty of the corruption charges the company is currently facing, it could be barred from bidding on the Broadway SkyTrain extensions, which are currently reliant on SNC-Lavalin technology for tracks and electronics and Bombardier for rail cars." Giving the contract for the Evergreen extension to SNC-Lavalin was a criminal act. Boeing is good, Bombardier is bad.

Let's negotiate a Boeing plant in Quebec to build super hornets. That would be money well spent.