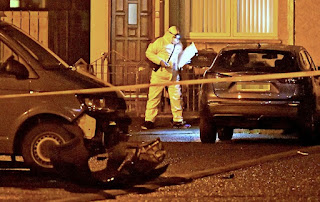 The Belfast Telegraph is reporting that "The PSNI is investigating a shooting in west Belfast on Monday evening. It's believed a man was shot in the knee and foot during the incident on Burnaby Walk off the Grosvenor Road shortly before 6pm. The ambulance service was not called and the man was driven to hospital in a car, where he's being treated." Shot in the knee in West Belfast... well, well, well, that certainly brings back memories.

The Irish News is reporting that "Police are treating a fire at a block of flats in the outskirts of east Belfast as arson. Two men and two women were rescued from the blaze at the property at Rosneath Gardens in the Ballybeen area on Sunday night. The front door of the property was sprayed with flammable liquid and set on fire at 9.40pm." Getting burned out of your home in East Belfast, that certainly brings back memories. I thought those days were long gone. Evidently not.