CTV is reporting that " Police are investigating after a 28-year-old man was shot and killed at a gas station in Burnaby Sunday night. Burnaby RCMP say shots rang out at around 6:30 p.m. at a Chevron gas station at Canada Way and Willingdon Avenue. A man, later identified as Julian Johnson, was found at the scene with gunshot wounds. He was taken to hospital but later died from his injuries. Officers say Johnson was known to police and it's believed the shooting was targeted and linked to ongoing gang conflict. "

"At around 10 p.m., Township of Langley Fire Department got a call for a vehicle fire at the 20700 block of 73B Avenue. Crews arrived on scene to a torched, black Nissan Rogue at a cul de sac. Police believe it's a suspect vehicle linked to the Burnaby shooting and say it was seen heading east on Highway 1 before it was found in Langley." 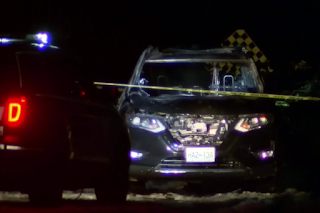