Kobe Bryant and his daughter killed in helicopter crash 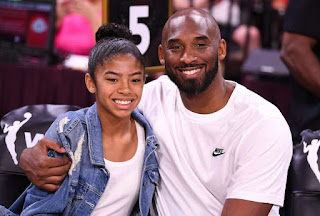 The Canadian Press is reporting that "Kobe Bryant, the 18-time NBA All-Star who won five championships and became one of the greatest basketball players of his generation during a 20-year career with the Los Angeles Lakers, died in a helicopter crash Sunday. He was 41."

YardBarker is reporting that "Kobe Bryant’s 13-year-old daughter was also killed in a helicopter crash on Sunday morning that claimed the life of the legendary basketball player." That is tragic.

"The crash occurred in the foggy hills above Calabasas, California, about 30 miles northwest of downtown Los Angeles. The crash occurred about 20 miles from Mamba Sports Academy, Bryant’s basketball training complex in Thousand Oaks, California. A girls basketball tournament was scheduled for Sunday at the facility. Bryant, who had four daughters with his wife, Vanessa, dedicated himself to boosting women’s sports in recent years, coaching and mentoring basketball players around the world. Gianna, better known as Gigi, had a promising youth career."

"Bryant lived south of Los Angeles in coastal Orange County for much of his adult life, and he often used helicopters to save time and avoid Southern California's notorious traffic. He often travelled to practices and games by helicopter before his playing career ended in 2016, and he kept up the practice after retirement as he attended to his many new ventures, which included a burgeoning entertainment company."