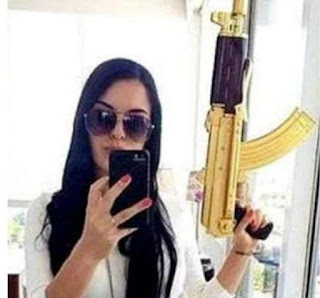 The Daily Mail is reporting that "Video footage has emerged showing the dying moments of a female cartel boss after she was fatally wounded during a shootout with police in Mexico. The clip and photographs appear to confirm she was María Guadalupe López Esquivel, known as 'La Catrina,' a female member of a cartel hit squad that massacred 13 police officers in October. The 21-year-old was involved in an attack against the military, national guard and police in La Bocanda, a town in the central state of Michoacán."

I have a lot to say about this one. We all know that the Mexican police have a bad reputation for being corrupt. Here we have a cop in Mexico video taping a young women shot on the side of the road before she dies. AYFKM? He claims that she was a member of a cartel hit squad that massacred 13 police officers in October. That is what he claims.

"One of the strongest and most recognizable symbols of The Day of the Dead celebrations is the tall female skeleton wearing a fancy hat with feathers. Her name is La Catrina who is a goddess of death that the Aztecs alleged protected their departed loved ones, helping them into the next stages" of the afterlife. Disney portrayed La Catrina in the movie Coco.

If it was her, the reason they killed her is because her cartel is a rival of the one the CIA was arms dealing with and getting their cocaine from in Operation Fast and Furious.

Was the girl they shot and filmed bleeding on the side of the road the same girl as the one in the picture holding the gold AK? I do not know. To me, they do not look the same. But then again, I didn't think the Bin Laden confession video looked anything like Bin Laden.

The former president of Colombia has a very bad reputation for killing villagers and dressing them us as paramilitaries to boast false positive killings. I don't know if that is what they have done here, but I do know that posting pictures of dying girls is in bad taste. You all need to find some self respect because you've lost it and no one can find it for you. That's something you're going to have to find for yourself. La Catrina: Peace. We'll see you on the other side. 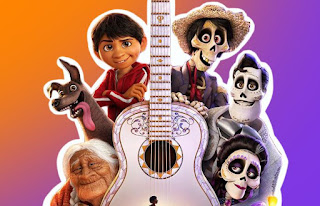 This video she posted seems to have a positive political message. Give it up for OneWayRD.