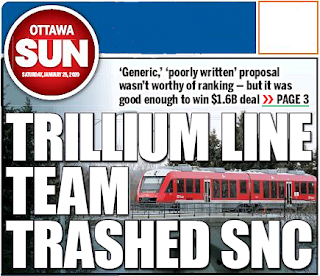 CBC is reporting that "Some Ottawa city councillors are calling for answers in the wake of revelations the city's technical evaluation team wanted SNC-Lavalin thrown out of the bidding process for the second stage of Ottawa's north-south rail line. Instead, the company was eventually awarded the $1.6-billion contract for Stage 2 of the Trillium Line."

"I was absolutely shocked with how poor the proposal was," said Coun. Carol Anne Meehan. "I was blown away that they really didn't have a clue what they were actually bidding on and that their bid contained so many gaps in what was essential."

CBC first reported in March 2019 that SNC-Lavalin did not achieve a minimum technical score for the project. In August the city finally admitted that the Montreal-based engineering firm failed to reach the minimum threshold not just once, but twice. The team had reached a "unanimous consensus that the proposal should not be considered further in the evaluation process," describing SNC-Lavalin's proposal a "poor technical submission throughout."

Trillium Line team trashed SNC-Lavalin - The Ottawa Sun. This is why we need independent media. Post Media News doesn't report this. Justin Trudeau's SNC-Lavalin fraud was nothing. The real fraud is the fact that SNC-Lavalin keep winning contracts they should not be allowed to bid on. This ties to all the political parties including the BC NDP since they all get kickbacks.