Iraq protests 17 years of US occupation 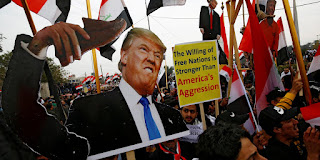 Rachel Blevins is reporting that "If this were Syria or Venezuela, the US gov't would be standing in solidarity with the protesters. But it's Iraq, and hundreds of thousands are taking to the streets to speak out after enduring 17 YEARS of US occupation."

The Business Insider is reporting that "Hundreds of thousands of Iraqis on Friday flooded the streets of Baghdad to protest against the ongoing presence of US troops in their country."

The Mind Unleashed is reporting that "Iraq’s parliament voted last month to expel the U.S. troops who have been occupying the country for nearly twenty years. However, the United States government has refused to comply with the order and has threatened harsh sanctions if they are forced to leave. On Friday, massive crowds of protesters poured into the streets of Baghdad to protest against U.S. occupation and demanded that western troops to be sent home."

"Foreign sources including Press TV estimated the crowds at over a million, while CNN suggested that hundreds of thousands were involved in the protests. The Wall Street Journal gave the smallest estimation at “tens of thousands.” However, video and images from the protest show that actual numbers were far higher."