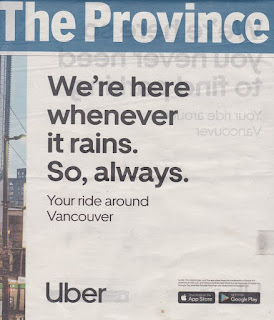 Today the Vancouver Province ran another full page ad over top the front page headline. Inside the paper there was another article complaining about the City of Surrey bullying Uber. AYFKM? You cannot get a more brazen example of corporate media than that. 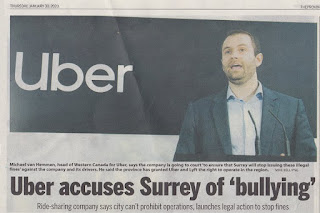 Personally, I don't give a rat's a*s about Uber. If you want to bring it in, go ahead. If you want to ban them, fine with me. I don't care. I'm simply pointing out that when Post Media News gets paid to run full page cover adds by a company, the subsequent news articles about that company aren't news, they are more advertising. This in the inherit problem with Corporate media.

I even saw John Horgan on the news saying it's time for MacCallum to back down. AYFKM? Have you ever heard the saying take the board out of your own eye before you take the spec out of your neighbors? Do you have any idea what that saying means?

What's my point? Wait 'till I tell ye. The City of Surrey has the authority and the jurisdiction to approve or deny business licences within Surrey. The Province has no right to tell them what licences them must approve if the City does't want it. John Horgan needs to be far more concerned with the ICBC mess the Liberals created and he covered up with skyrocketing rates instead of simply returning the dividend the liberals stole. John Horgan needs to worry about that not what business licenses the City of Surrey is or is not approving.

I support Doug McCallum. He said he'd get rid of the LRT in Surrey over Skytrain and he'd get rid of the RCMP over a municipal force. That is what he was elected to do. Doug McCallum has chosen to oppose Uber because the taxi drivers in Surrey object to it. I can understand why. Taxi licenses are expensive and it's hard enough for them to make money. You bring in a ship load of scabs and their chance to make a decent living is flushed down the toilet.

I don't understand what all the hoopla is over Uber. If you feel comfortable getting in a car with a stranger you met online who put a magnetic Uber sign on his car go right ahead. I do not. I do know that the Provincial government needs to worry about fixing the ICBC fraud they are perpetuating before they do anything else. That is what they need to worry about.

On the credibility meltdown of Post Media News, Diane Watt's pathetic lapdog is still complaining about Skytrain over LRT. Now that it's obvious everyone wants Skytrain over LRT and they have chosen to extend Skytrain to UBC, he's still complaining about that decision. That loser really needs to get a life. Trains in Europe commute between cities through rural areas. They don't run trains on the ground thorough busy intersections. That is f*cking stupid. Get over it. 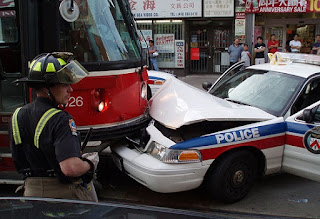