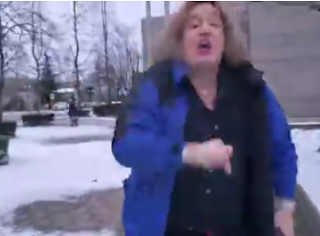 Jonathan Yaniv is in the news again. Here's a video of the predictor assaulting a reporter. He/She runs up to the reported at the courthouse, repeatedly punches him and as he/she keeps following and perusing the reporter shouting get away from me. That's kinda like the cop who beats the sh*t out of someone while they yell stop resisting. The video shows Yaniv chasing the reporter and assaulting him. This is the cross dressing predictor that sexually harasses women.

After losing the bogus human rights complaint where he/she targeted vulnerable women demanding they wax his male gentiles he /she filed a new complaint all over again. Yaniv is using the court system to sexually harass women. This is the guy that was fired for sexual harassment who figures if he starts cross dressing he can enter ladies washrooms and sexually harass women. How a Single Gender Troll Managed to Get ‘Hundreds’ of Women Thrown Off Twitter