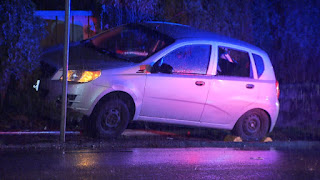 The Burnaby Now is reporting that Burnaby RCMP is investigating a shooting that sent an 18-year-old to hospital with non-life-threatening injuries Sunday night. Local police got reports of a shooting at Willingdon Avenue and Burke Street at about 10:15 p.m., according to a press release. Upon arrival, officers found a shot-up Suzuki Swift that had crashed into some bushes."

"The three men who had been in the vehicle had fled, according to police, but an 18-year-old who had been shot in the leg was found not far away on Willingdon, and the other two occupants were located shortly after. 'At this time, it appears as though the victim was in a Grey 2011 Suzuki Swift with two other men, driving southbound on Willingdon Avenue, when a white sedan pulled up beside the vehicle and started to shoot at them,' states the release. All three men in the vehicle are known to police, and the shooting was likely targeted, according to police."