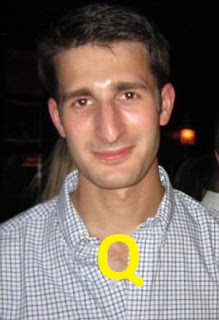 A lot of Canadians might not realize how popular and how extreme the QAnon movement is in the United States. Its like the Sovereign Citizen movement. If someone in Canada said hey, if you renounce your citizenship you don't have to pay taxes everyone here would laugh and say good luck with that buddy. We can debate how taxes are spent but everyone in society has to contribute to society. People here would see that as uneducated. Since a few people subscribe to the QAnon cult here, it's time for me to address it since I want no part of it.

Q is an anonymous person who claims to have inside information about the deep state. They reveal tidbits called Q drops in support of the Great Awakening. Yet with all its sound and fury, nothing has really been revealed. Just alot of talk about a lot of nonsense. Subscribers of this cult think Donald Trump is a Messiah. I kid you not. A racist hillbilly doesn't really fit the profile of a messiah but others like Jim Jones have amassed before so I suppose why not a racist hillbilly. Inbreeds need love too. Just don't drink the the Kool-Aid. Jim Jones was a "Christian" minister.

The Qdrop cult think everyone that disagrees with a Trump policy is a child raping satanist which ties into Pizzagate. Jeffrey Epstein was a sleazebag who set rich POS up with young prostitutes around 17 years of age. Bill Clinton was one of many but that's not enough. QDrop cultists believe Bill Clinton and the rich elite were raping babies. That is ridiculous.

This is an example of how the Agency infiltrates the truth movement and turns some thing real into nonsense. Operation Northwoods was real. No conspiracy theorist made that up. No planes hit the third tower yet it collapsed into it's own blueprint like a controlled demolition. Only some infiltrators within the truth movement insist 9/11 was a thermonuclear device. OMG.

Controlled demolitions happen all the time. Thermite is used not a thermonuclear device. If 9/11 was the result of a nuclear explosion, radiation would have been detected for years afterwards.

Likewise, the QAnon Cult has become ridiculous. Donald Trump is not draining the swamp. He did the exact same thing Hilary Clinton did in Honduras. He supported election fraud to get a corrupt man elected in support of Iran Contra.

If you want to read what real insiders have to say about the deep state read what Terry Reed and Al Martin have said about it. They are truthful. The QDrops are not. Corruption is nonpartisan.

When I fist heard about Q it was reported that they were a *former* intelegence agent. Then other news sources claimed they were an active intelligence agent that's why they had top security access. I think the later is the case. Now that Q has come out in support of Iran Contra, they have outed themselves. Truthers don't support Iran Contra. Truthers support Ron Paul. Truthers don't support Operation Northwoods. Truthers oppose the use of false flag attacks as a pretext for war.

I want to be very clear in that I completely support the Real Anonymous. It's just that QAnon is not it. What I find so inherently amusing is that you all are listening to someone from the deep state wearing a Guy Faux mask. Anyone can put on a Guy Faux mask. Even the CIA.

Corporate hacks impersonated Anonymous when they hacked into Laila Yuile's blog. The real Anonymous had no motive to hack Laila's blog. It happened right after she made the post about the Bald Eagle's nest violating the court injunction at the Site C Dam. The corporate hacks sh*t their pants because she almost shut them down over the Migratory Birds Convention Act. Anonymous would not of hacked her especially at that moment.

The War Pigs Are Finally Revealing Themselves

Evidently I'm not the only one that opposes Iran Contra. The Activist Post is reporting that "The Obama Administration’s attempts to lure Americans into supporting open war with the Assad regime in Syria had failed. Consistent attempts by George W. Bush and Obama to increase tensions with Iran had fizzled. Americans were showing signs of fatigue, FINALLY fed up with the lies being constructed to trick them into being complicit in the banker wars. Trump was a breath of fresh air…but of course, like all other puppets of the globalists, his promises were empty."

Opposing Iran War Doesn’t Make You Conservative or Liberal, It Makes You Smart