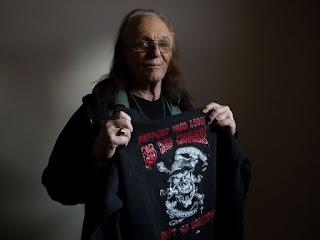 The Calgary Herald is reporting that "A self-described old hippie arrested at West Edmonton Mall after being asked to remove a Hells Angels support shirt says he is disappointed after losing an appeal to the Alberta Law Enforcement Review Board in the case." He repeatedly refused to take off Hells Angels support gear in the West Edmonton Mall after security guards asked him to in support of the city's ban on gang paraphernalia.

Although I completely support the freedom of association, that Charter Right does not include the right to promote organized crime. The guy is obviously a dick. They asked him to remove the hoodie or leave the mall and he refused. Then he cries and plays the victim. That is the epitome of pathetic and is completely consistent with the HA mentality. Be the bully, play the victim.

Anyone can wear a support shirt. However, support shirts are consistently used to show drug dealers affiliation with the Hells Angels and claim protection from them against rivals to sell drugs. I have seen support shirts used in Surrey to enforce for crack dealers in Whalley.

He claims he picked up the support shirt at the Hells Angels’ clubhouse in Westridge, where he attends social functions at least a few times a year. AYFKM? The Westridge chapter are POS. They have a long documented history of drug trafficking and murder.

Dusty Swanson is a Westridge supporter who recently returned from committing murder in Greece at a Hells Angels function there. He and two members of the Hells Angels beat a father to death in Greece because he asked them to get off his motorcycle so he could leave and go home to his kids. They ganged up on him and beat him to death. No one likes a bully. Nick Dragich, one of the Hells Angels with him is from the Westridge chapter.

The number of cocaine convictions tied to the Westrdige chapter are too long to list. Dominic DiPalma is from the Westrdige cphapter. He was tearfully convicted of cocaine trafficking. His co accused, Blake Christie was murdered.

Dominic DiPalma was the Westride member in charge of all the drug trafficking of the Whiteboy Posse who were responsible for beheading Bob Roth for a drug debt owed to the Hells Angels.

There was also a little girl who was murdered because her parents had a drug debt to the Edmonton Hells Angels. Upholding the ban on gang colours is a good thing. Bullies playing the victim is just plain pathetic. Nobody likes to see that. This ties in with our New Years' theme about accepting responsibility for your choices without blaming others. It's time to man up and own it.

Posted by Dennis Watson at 8:53 PM