Open Drug use in Kelowna 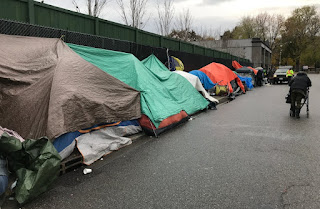 The CBC is reporting that "Despite an exodus of businesses from Kelowna's Leon Avenue over issues around the city's street population, one entrepreneur is bucking the trend by starting up a vegan restaurant on the notorious street. Chef Shaun Sanders has opened the Renegade Kitchen & Craft Bar with a partner in the 400 block of Leon Avenue just two buildings down from one of Kelowna's biggest homeless shelters in an area known for its open drug use and vandalism." Open drug use - lawlessness. That is the root of the problem. Just like Vernon.

The Vernon Morning Star is reporting that residents are joining a class action law suit against the city of Kelowna because instead of enforcing the law and disbanding the drug camp they want to relocate it to the park. "No more open drug use." Sue the city for not enforcing the law. It's about time. The Four Pillars has four pillars not one. By abandoning the other three pillars harm reduction has become harm promotion making the city and the government criminally culpable in all that drug related crime and violence as well as the over dose fatalities.

Posted by Dennis Watson at 5:01 AM