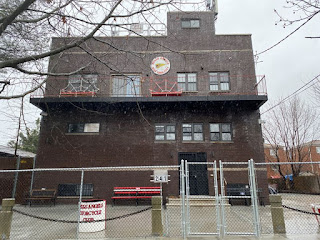 The New York Post is reporting that "The new Hells Angels clubhouse in the Bronx was shot up overnight by a group of unknown people on motorcycles hours after news reports announcing their move were published, police and reports said Friday."

"Sometime around 10:35 p.m., police responded to the former American Legion Post building on Longstreet in Throggs Neck and found 14 shell casings littering the property, cops said. They determined “several shots” were fired and the building was damaged but couldn’t provide further details. The notorious biker gang just sold their longtime East Village headquarters back in March and only recently moved into the building, much to their neighbors’ chagrin, NBC News reported. “Who wants to live next to them? They’re not called the angels from heaven or the community angels or the guardian angels,” Alejandro Coban told the outlet just hours before the shooting. “No, they’re called Hells Angels!” Give it up for the New York model.

The Hells Angels recently moved into a new clubhouse in the Bronx out of their old clubhouse in the Village. I don't know what it's like now but back in the /80's the Village was kinda white and nerdy. It was the only place in New York you would see punk rockers. The non violent nonconformists that would dress strange as their way of expressing themselves. You'd see lots of those guys in Canada but I didn't see any of them up in Harlem or down on the Deuce.

Last week the New York Daily News reported that "Roaring motorcycle engines and late-night carousing have bedeviled the once-quiet Bronx neighborhood where the Hells Angels have just set up their new New York headquarters. The infamous motorcycle gang bought a two-story brick building in middle-class Throggs Neck, and a noisy gathering at the headquarters earlier this month disturbed neighbors. “You could hear them, they were loud,” said Chris Fernandez, 36, whose home overlooks the new club at 241 Longstreet Ave. “Oh, my God, they were going the whole weekend, literally through the night.”

Here's my point. New Yorkers are not impressed by the Hells Angels. That's why I was so dumbfounded when I heard hillbillies admire them here. This is why I encourage youth to travel so they can get out of the fish bowl and see what life in the real world is like. The New York girls wouldn't give the HAs the time of day. They are more educated and have more self respect.

In 1977 Vincent Girolamo threw his 22 year old girlfriend off the top of the 6 story clubhouse in the Village and killed her. He was killed before he could stand trial from a ruptured spleen he received after being beat up by the Oakland President Michael “Irish” O’Farrell. Vinny was a POS. Irish did him a favor by putting him out of his misery. George Christie set the record straight and confirmed that Irish beat Vinnie one on one. They did not rat pack him. Irish however was stabbed in the neck, chest and back, as well as shot four times from behind. Irish was the warrior. Vinnie was a sleazebag. New Yorkers could see that and had no respect for him.

The Hells Angels getting their new clubhouse shot up in the Bronx after disrespecting the whole neighborhood with a loud party was a natural consequence of them being dicks. Own it. New Yorkers don't take that kind of sh*t from anyone. Give it up for the city yo.