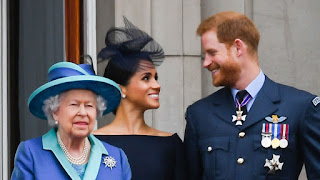 I don't follow the royal families much because I have a life and they deserve one. I've stated my position on the royal family quite clearly. Moses said the sceptre shall not depart from Judah. Even Muslims believe Moses. I will however point out that the British tabloids are trash. 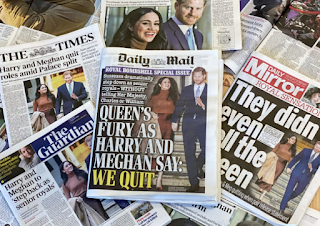 I worked in London for a while as a chef many years ago. The British tabloids are exactly that - tabloids. They are gossip trash like the National Enquirer. Anything to sell a paper. The Murdoch files were caught wiretapping the royal family's phones. That isn't just illegal, that is treason. It is an offense against the crown. Who do you think was tapping the royal families phones for the British tabloids? It was MI6. They are behind the biased propaganda of the Murdoch tabloids.

When I was in London I noticed that on page three of the Sun they always had a new picture of their sunshine girl. A woman topless. I kinda raised my eyebrow and said this is a newspaper? How am I supposed to take their "news" reporting seriously. I don't remember seeing that in Ireland. The Belfast Telegraph had a lot more class and credibility. They reported news.

I will declare that the front page coverage of Harry & Megan on the New York Post was tasteless, disrespectful and offensive. What in God's name has happened to the credibility of the New York Post?! Oh, I see. Rupert Murdoch bought it in 1976. Everything he touches turns to sh*t.

I'm not going to comment on the Megxit "scandal" much. I will however say this: Harry & Megan, William & Kate, Charles & Camela, the Queen and Philip are all noble. I'm not referring to a meaningless title bestowed upon them by some rich yuppie. I'm talking about the nobility of their character. They all have it. They have class, dignity and integrity. Each jewel shines in it's own light. Diana is of course the Queen of Hearts. She is and was a true saint.

The Queen did not kill Diana. The paparazzi did. They were in a car racing through a tunnel trying to`get away from the paparazzi. They got in a car accident and tragically, Dianna wasn't wearing her seat belt. Now everyone wears a seat belt. Back then, not so much. They didn't have seat belt laws and back then it just wasn't a big deal. Unfortunately in this case it was. It was a fatal car crash that took the life of the best thing that ever happened to the royal family.

This is why I don't buy tabloids. Tabloids killed Diana. When I see the recent barrage of headlines about Harry and Megan, who wouldn't want to get away from that? I am told that the tabloids and social media have been disrespectful toward Megan Markle. AYFKM? Megan is gorgeous but more importantly, she is a beautiful person. That is what life is all about.

Trevor Noah from the daily had a humorous commentary about Megxit. Members of the royal family want to step back from the spotlight and become financially independent. What in God's name is wrong with that? We should be applauding their nobility not trashing their family. Diana was very protective of her sons against the media. Why shouldn't Harry and Megan do the same for Diana's grandchild? Have a little respect for God's sake. Let them have a life. They deserve it. 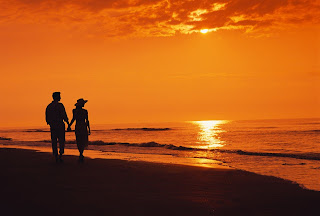 They are welcome here. Let them have their privacy. They are noble.

In contrast, the Belfast Telegraph is reporting that "The Queen has issued a statement in support of the Duke and Duchess of Sussex following the crisis summit saying the royal family respect and understand their desire for a new life."

The Belfast Telegraph has class. Rupert Murdoch does not.

Note to paparazzi: F*ck off! You are the ones that killed Diana. Get a life and leave them alone. We don't do that here you freaking tabloid trash. You are not welcome here. Leave.

CBC, which is not owned by Rubert Murdoch, is reporting that "Meghan Markle made an appearance in Vancouver Tuesday for a quiet visit with frontline workers at a downtown women's shelter. She was just casual and lovely." Now that is noble. Calm and heartfelt. Bienvenue.

This is their official website. Get your news about them from here not from Murdoch's trash.