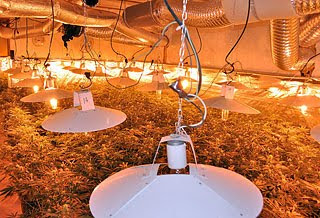 Like this isn't suspicious. November 28 2010 it was reported that Four men linked to the Kelowna Hells Angels were caught speeding through Salmon Arm with a cache load of weapons, bear spray, balaclavas, bullet proof vest and a cell phone jammer.

Joseph Bruce Skreptak was the Hells Angel in the car with three associates including Cory Montemurro. So where were they going and what were they planning to do? Many speculated that they were on their way to do a grow rip. That's why they had the cell phone jammers. More like another grow op takeover.

Well on January 14 2011, Salmon Arm RCMP executed a search warrant at a residence on the Trans Canada Highway near Blind Bay and found a fully operational grow op. The hydroponic lights were on but nobody was home.

"The home and shop were outfitted as a large marijuana grow operation, with the capacity of producing 3000 plants. No one was home at the time of police attendance and it appears that this grow operation had been abandoned," says Salmon Arm RCMP Staff Sergeant Kevin Keane.

Keane says although the equipment was still running, approximately 2000 smaller plants were found in various stages of decay.

"There's plants just dying. Nobody was tending it. It looks like someone just got up and left," says Keane. He says he has never seen something like this before and can't explain why someone would leave thousands of plants to decay.

Wow, you'd think they might have thought the Hells Angels were on to them and were going to take them over so they left town. Go figure.