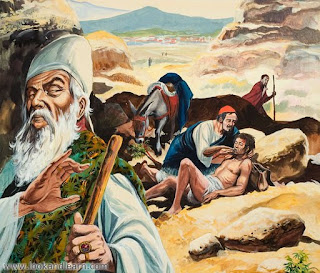 Before I proceed, I need to state the obvious. Hypocrisy is a human flaw that effects all of us and every organization be they religious or political to some extent. The wolves in sheep's clothing principle. It does not mean the original ideal is not worthy of aspiring to.

When Christ was on the earth, he criticized the religious leaders at the time calling them liars, hypocrites and extortionists. Clearly the Jews did not have a monopoly on hypocrisy. Muslim extremists killing innocent civilians is hypocrisy. TV Evangelists like Jim Bakker and Jimmy Swaggart have likewise been paid well to say one thing and do another. In fact it has been said that if Christ had come in our day, it would have been the Christian Church that crucified him.

I find Sarah Palin's declaration of war against Islam disturbing. Let's take a look at the parable of the Good Samaritan and put it in modern context by calling it the Parable of the good Muslim. Back in the day, Jews didn't like Samaritans. That's why Christ chose to make his parable about a good Samaritan. No doubt if he was here today he would tell Christians the parable of the good Muslin reinforcing the fact that God is not a respecter of persons and how we live our life is more important that what we say we do.

My point is, just because George Bush and Bill Clinton may have known about the CIA's drug running operations in Mena Arkansas, that does not mean we should give up on our political system and abandon the Constitution which many have misquoted for their personal gain.

Ron Paul spoke out against George Bush's involvement with the CIA drug running. His response was to abandon the war on drugs and legalize all drugs. I'm like what the hell? Where on earth did that come from. Decriminalizing pot is one thing but legalizing all hard drugs is socially irresponsible.

Nevertheless, Jesse Ventura was asked about the two party system in the United States. He said he thought it was great. It was like asking someone what do you want to drink then telling them all they can have is Coke or Pepsi. They're both soft drinks. They're a little bit different but basically they're the same so the people really don't have much of a selection.

Clearly, the problem is the fact that the CIA has far too much power and has absolutely no public accountability whatsoever. Personally I find it amusing to discover that as recent as 2004 the official emblem for the Canadian Secret Service was a cartoon beaver - wearing trench coat, dark glasses and fedora.

It's kind of hard to take that organization seriously. Yet if it shares any intel with the CIA we all now know where the security leak is. How about that Promise software the CIA stole and sold to it's allies. It was just a Trojan horse that let the CIA spy on it's allies. With friends like that...