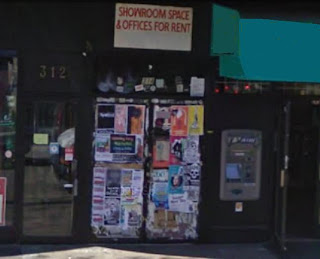 Here's one you won't read in the paper because it wasn't reported to the police. A couple weeks ago three men claiming to represent the Hells Angels stormed in to the American Backpackers Hostel on Pender street in Vancouver. They had guns drawn and demanded to know where one of the residents were. He's not here they replied. We know he lives here they insisted. He has been selling pot and he hasn't been selling it for us. Tell him he has to leave town and tell everyone else they can't buy from anyone else any more unless they buy from us at the Black Door.

So my theory resurfaces. If the Hells Angels used violence in East Vancouver to chase away a rival drug dealer and if the Hells Angels run and control the drugs sold out of the Black Door on Hastings street, one would think they too are the ones controlling the drugs being sold just a few blocks up the street at the Carnegie Centre.

If that's true then they are the ones who are ultimately responsible for the violence against women in East van over drug debts. This is supposed to be a free country. If I want to sell some pot it's no one else's business. When the Hells Angels come in and say you can't sell pot unless you sell it for us I say bullshit. That Nazi shit just doesn't fly. The gang violence we have been witnessing isn't about loyalty, it's about greed.

Oh and get this, they won't even sell pot in the Amsterdam cafe. You have to go across the street and buy it from the Hells Angels. That means Mark Emory and the entire 420 movement are getting fucked in the ass by the Hells Angels and they are all too scared to say shit.

Talk about rats. Witnesses claim the Hells Angels sent someone to to stay at the American Backpackers Hostel undercover to buy pot and give them the name of the person selling. So here we have a guy pretending to be someone's friend, buys some weed for the sole purpose of getting his name and giving it to the Hells Angels who storm the place with guns looking for him. That is being a rat. Reporting the Hells Angels violence to the po po is not.

So here's the deal. Fuck 'em. Boycott the Black Door. Don't buy shit from the Hells Angels any more. Buying their shit is supporting their violence. The Hells Angels are getting rich in East Van by oppressing the poor and disadvantaged as well as anyone else who just wants to smoke a blunt. Fuck 'em. Boycott the Black Door. Go buy from the Wizard on Granville instead. Mind you I'm having a hard time believing he's independent. Time will tell. It always does.