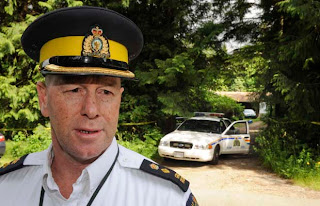 I didn't realize Maple Ridge was so famous for grow ops and the Hells Angels. That is an interesting combination indeed realizing the recent Hells Angels violent bid to chase a pot dealer out of their neighbourhood in East Vancouver. I think it will be well worth looking into all the grow ops in Maple Ridge and how that ties in with the Hells Angels.

We know Rob Shannon was caught in a large pot for cocaine operation in the States. They had to get the pot from somewhere. I never used to have a problem with the Hells Angels owning grow ops. I just have a problem with Hells Angels robing grow ops and taking them over. That is somewhat bizarre. But then again there has been a lot of bizarre things that have gone on in Maple Ridge. Golden Ears is such a nice place. Perhaps it's time to take out the trash.

After all, Arthur Eyford wasn't a known member of a gang but he was a known biker associate. Gee I wonder which outlaw motorcycle group in Male Ridge he was an associate of?