Manuel Noriega and the CIA 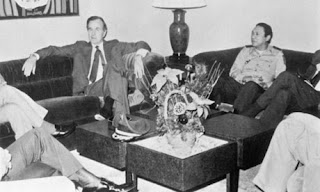 Although the relationship did not become contractual until 1967, Noriega worked with the U.S. Central Intelligence Agency (CIA) from the late 1950s until the 1980s. In the 1988 presidential election, Democratic candidate Michael Dukakis highlighted this history in a campaign commercial attacking his opponent, Vice President (and former CIA Director) George H.W. Bush for his close relationship with "Panamanian drug lord Noriega."

Noriega strengthened his position as de facto ruler in August 1983 by promoting himself to full general. Noriega, being paid by the CIA, extended new rights to the Uniteoran insurgent Farabundo Martí National Liberation Front in Panama, and likewise rebuffed demands by Lieutenant Colonel Oliver North of the United States Marine Corps that he provide military assistance to the Nicaraguan Contras. Noriega insists that his refusal to meet North's demands was the actual basis for the U.S. campaign to oust him.

Beginning in 1986, U.S. President Ronald Reagan negotiated with General Noriega, requesting that the Panamanian leader peacefully step down after Noriega was publicly exposed in the New York Times by Seymour Hersh, and later exposed in the Iran-Contra Scandal. The Panama Deception is an Academy Award winning documentary about the subsequent Invasion of Panama.

Here are the facts: Manuel Noriega was a long time CIA asset and drug lord. The CIA turned on him after he was exposed in the Iran Contra Affair and in the New York Times. It is unrealistic to believe that the CIA did not know he was smuggling drugs all those years. Especially when that was what the Iran Contra affair was all about and Oliver North said he was authorised to do everything he did. BTW the Iran Contra Affair involved a lot more than just Iran.