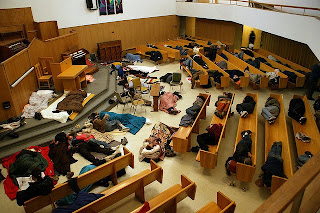 A man has been arrested for one of the six sexual assaults reported at a Downtown Eastside cold weather shelter, say police.

Women’s groups on the Downtown Eastside are horrified by reports that six women have been sexually assaulted while taking refuge in an overnight shelter.

MacDougall said women are terrified to make first-person reports to police, although two of the sexual assault complaints were made by victims, another by paramedics called to help a viciously violated woman, and one by church staff.

I'm shocked and confused. Why aren't these reports taken seriously and how on earth can that happen in a crowded shelter? Do they meet them at the shelter and drag them outside or are they sexually assaulted in a crowed room? Are we talking about grabbing an ass or are we talking about rape? Raping someone in a crowded room and no one helps stop it is absolutely mind boggling.