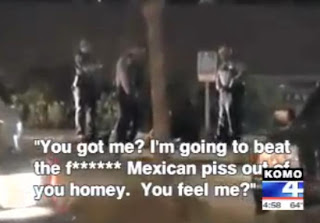 Seattle had a town hall meeting about their police brutality last night where the people demanded the resignation of the police chief. They haven't just been beating civilians in unprovoked attacks they have been shooting them. Even though we complain about our system a lot we don't have to look very far to see someone who has it worse.

Sadly it appears their brutality problem is racial. At least that's not the case here. Here police will give a cracker the boots just as fast as anyone else. Sadly the Ottawa incident could have been racial. That's something we don't like to even consider let alone talk about. One would think society has evolved out of the stone age by now.

There was an interesting letter from one of the victims of police brutality in Seattle who survived. It references some of the corruption in their political system there. Shocking allegations indeed. One would think they were talking about a third world country not the US of A.

I remember speaking with a Seattle cop in the /80's when crack houses were all over south Seattle. He had been putting pressure on the crack dealers there and was transferred behind a desk. He thought his transfer was suspicious.

Is there another reason police in Vancouver let the Black Door and the crack dealers at the Carnegie centre stay in business? I don't know.

Posted by Dennis Watson at 8:24 AM