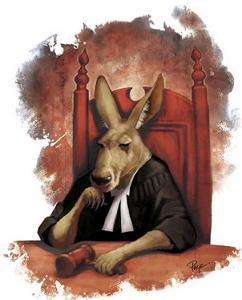 Speaking of hypocrisy, Stephen Harper is fast tracking another Tory appointment to the bench. Brian Abrams was among a raft of judicial appointments announced last Friday by Harper's government.

Liberals rewarded their own partisans with judicial appointments when they were in power - a practice Harper used to rail against. So Harper is doing the exact same thing he used to rail against his opponents for doing. Is this surprising? Not really.

Remember how Harper talked about electing Senators. Well since he's been in power he has stacked the senate with Tory supporters as much as physically possible. The promise of electing Senators has fallen by the way side. You'd think he's getting ready to stack the senate like Brian Mulroney did for something controversial that the public doesn't want like then HST. That would certainly be deja vu.

In fact, since so many supreme court judges are due to retire, Harper could have a significant influence on the direct the courts take in the near future.

Let's see, Paul Martin appointed Peter Leask as his last dying act in power. We are still paying very dearly for that horrible appointment in BC.

Yet Stephen Harper appointed a Hells Angels patent lawyer to the bench. He was also a long time Tory supporter. Go figure. Alfonso Galiano was tied to the mob and Stephen Harper apoints a lawyer for the Hells Angels to become a judge. What'll it be - Coke or Pepsi? Same stuff different pile. The Reform Party's dream has returned to Mulroneyism. What a sham(e).