John Bryce, David Giles and a Ship load of Cocaine 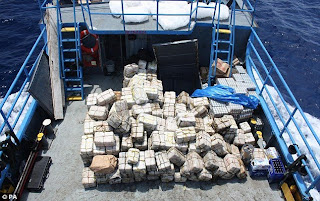 What do John Bryce, David Giles, a ship load of cocaine and Oakland California all have in common? The Hells Angels. David Giles is a longtime member of the East Vancouver chapter of the Hells Angels and has been caught on wiretap claiming a cocaine dealer in Kelowna made him $30,000.00 in several months.

John Bryce in one of the original members of the East Vancouver chapter and is currently the chapter president. He insists he has done nothing illegal. Others claim he is well insulated. His son Jonathan plead guilty to extortion and cocaine trafficking. I've heard of a father taking a fall for a son but not a son taking the fall for his father. That shows you what kind of guy Bryce is.

One source claimed the ship load of cocaine involved John Bryce and David Giles. I never really thought about that before. If it was Hells Angels cocaine like they claim, then surely whoever was in charge of the Hells Angels at the time would be involved with it. We do know that Bryce and Giles were local leaders at the time. However right now the only official connection between the two and the event is that they all had some kind of connection to the Hells Angels.

Which leads us to the next chapter of the ongoing saga: Does Giles have beef with Bryce? If so, how far will it go?