Don Lyons back in Business 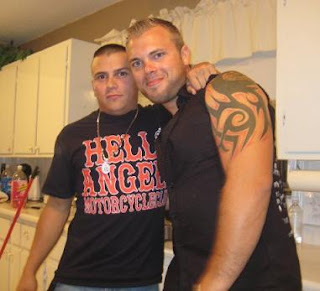 OK my mistake. Someone sent me this photo and I was under the impression that is was of Don Lyons. So who is the guy with Chad in the HA shirt?

Well, Don Lyons is back in black. I mean red and white. Donnie plead guilty to trafficking cocaine. Court documents claim Lyons belonged to the Independent Soldiers and was Lester Jones' primary source for drugs. Lester was the vice president of the Kelowna Hells angels at the time.

Robertson purchased several kilograms of cocaine through Jones before arranging a drug buy with Lyons in a Kelowna hotel room. Police video cameras captured Lyons exchanging 1 kg of cocaine for $26,000. Another key bites the dust. Plenty more where that came from ain't there Skelletor.

I'm having trouble with the math. Lyons got a 8 and 1/2 year sentence. The judge gave him double credit of 30 months for time served, reducing his remaining sentence to six years. That was in April 2009. Two thirds of six years would be four not two. So how come he's out now?