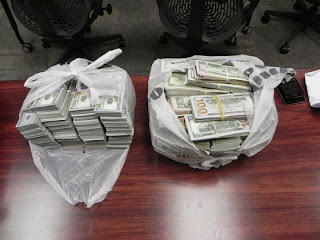 A news outlet from Riverside California called The Press Enterprise is reporting that "Almost $1 million in cash believed to be linked to the Hells Angels outlaw motorcycle gang in British Columbia was seized Thursday, Feb. 12, from a Canadian man at a Riverside restaurant. Investigators believe the money is linked to cross-border drug smuggling and money laundering. The man, whose name was withheld because of the continuing investigation, is from Alberta, Edmonton." The suitcase full of cash was seized by Homeland Security. Heads are gonna roll.