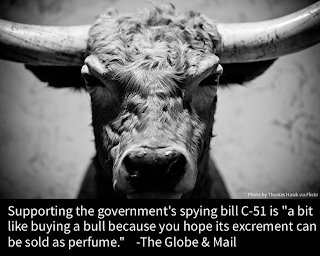 The Globe and Mail published a great article about Stephen Harpers bill that declares war on civil liberty. Open Media turned a Globe and Mail quote into an image that can be shared on facebook and on Twitter. Green leader Elizabeth May states that the passing of Harper's Police State Law means 'death of freedom'. God bless her. CSIS provided the explosives for the Air India bombing. Charge them with that murder before you give them more power to break any more laws.

Leadnow.ca has a petition about the bill. The Toronto Star is reporting that “So far, the only opposition MP with enough guts to critique the content of the Conservative government’s new anti-terror bill is Green Party Leader Elizabeth May.” The Green Party have their own petition. 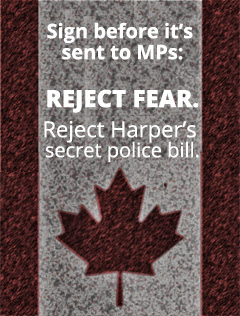